If you’re an American aged between 30 and 49, there’s an 83% chance you have at least one credit card. If you’re categorized as an average US consumer, statistics indicate that you probably have four.

According to the latest Federal Reserve consumer credit report, American consumers' collective revolving credit debt recently fell below the $1 trillion mark for the first time since 2016. In May 2020, it stood at $995.6 billion. That’s lower than mid-2019, when US credit card users were juggling a combined credit card debt of $1.08 trillion.

But the revolving credit industry is still big business, with only a handful of companies holding a percentage of the US credit card market share.

The right stockbroker is a powerful asset when investing your hard-earned money.
Take the stress out of managing your portfolio with an Online Stockbroker. Click below and get the ball rolling TODAY.
Start Investing Today
ADVERTISEMENT

Payments made by private-label credit cards represented the remaining 8.5% of transactions in 2018. The average value of credit card payments was the same for both card types and equalled $89, a slight decrease from the $90 in 2015.

When discussing the market share of credit card companies, it’s important to understand that there are two main ways to segment this extremely competitive industry. In this article, you’ll find credit card market share data by network and revolving credit market share facts and statistics by issuer.

First of all, let’s define the terms. A credit card network, such as Visa or Mastercard, sets the terms for credit card transactions, authorizes them, and processes them. Meanwhile, a credit card issuer - usually a bank, a credit union, or a similar financial institution - provides (issues) credit cards to consumers.

The US credit card market is dominated by four giants: Visa, Mastercard, American Express, and Discover. However, it’s important to note that the four competitors are by no means equal.

While Visa and Mastercard are distinguished by a notable advantage in terms of global acceptance, American Express and Discover are well-known as payment facilitators that don't need a middleman as they issue cards directly to consumers.

The Fed’s 2019 Report to the Congress on the Profitability of Credit Card Operations of Depository Institutions confirmed the status of Visa and Mastercard as the most popular credit card brands.

These two companies combined accounted for 84% of all US general-purpose credit cards or a total of nearly 569 million cards in 2018. The American Express and Discovery networks contributed with another 111 million general-purpose cards the same year.

The total number of transactions (charges and cash advances) made with credit cards from all four networks reached 41 billion and amounted to approximately $3.8 trillion.

Based on the Nilson Report issued in February 2020, Visa and Mastercard were once again the networks providing the most used credit cards in the USA in 2019. There were 333.1 million general-purpose Visa credit cards in circulation that year and 243 million Mastercards. 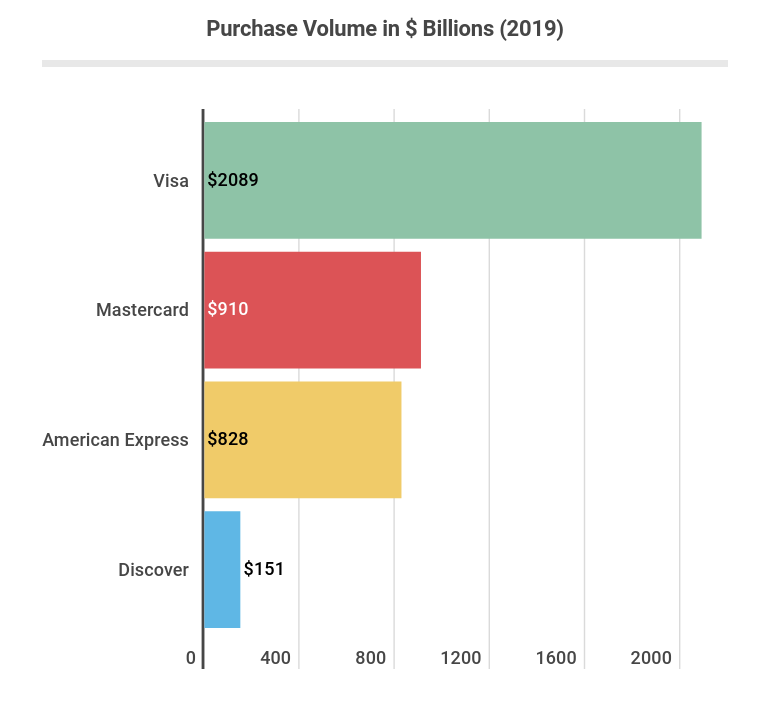 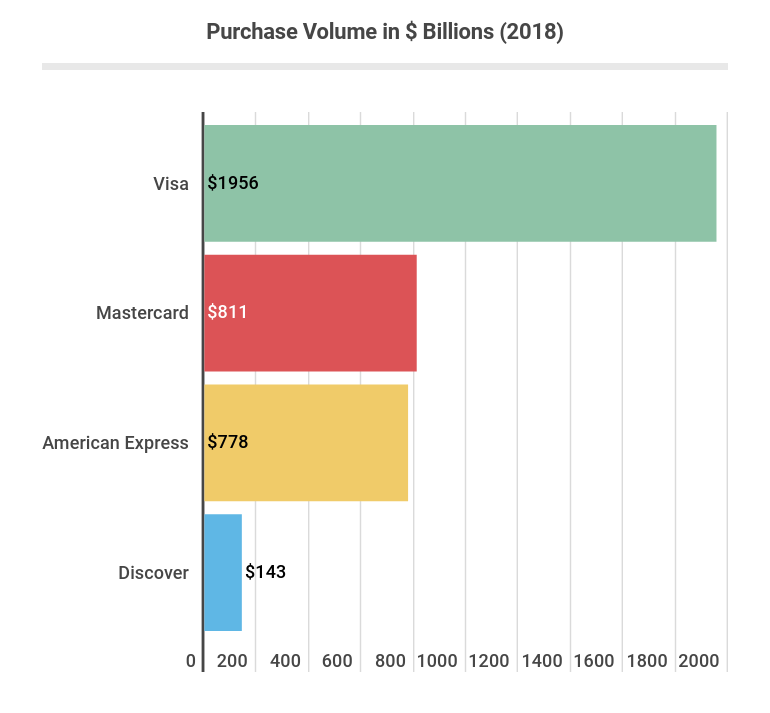 Mastercard is the second-largest US credit card network. Its US credit purchase volume was $910 billion in the fiscal year 2019, up from $811 billion the previous year.

In 2019, there were 244 million Mastercards being used in the US and more than 700 million worldwide. The previous year, that number stood at 227 million in the US and 641 million cards in the rest of the world.

Out of the world’s total 49 billion Mastercard purchase transactions, more than 20% - which accounts for approximately 10 billion transactions - were processed in the US in the fiscal year 2019.

As one of the top competitors in the credit card industry, American Express has also seen constant growth. US Amex cardholders spent a total of $827.7 billion in 2019, up from $777.6 billion the year before.

Changes in issuers' market share are caused not only by competitive dynamics and consumer preferences, but also by evolving trends in financial brand recognition.

Credit Card Market Share by Issuer Based on Outstanding Balances 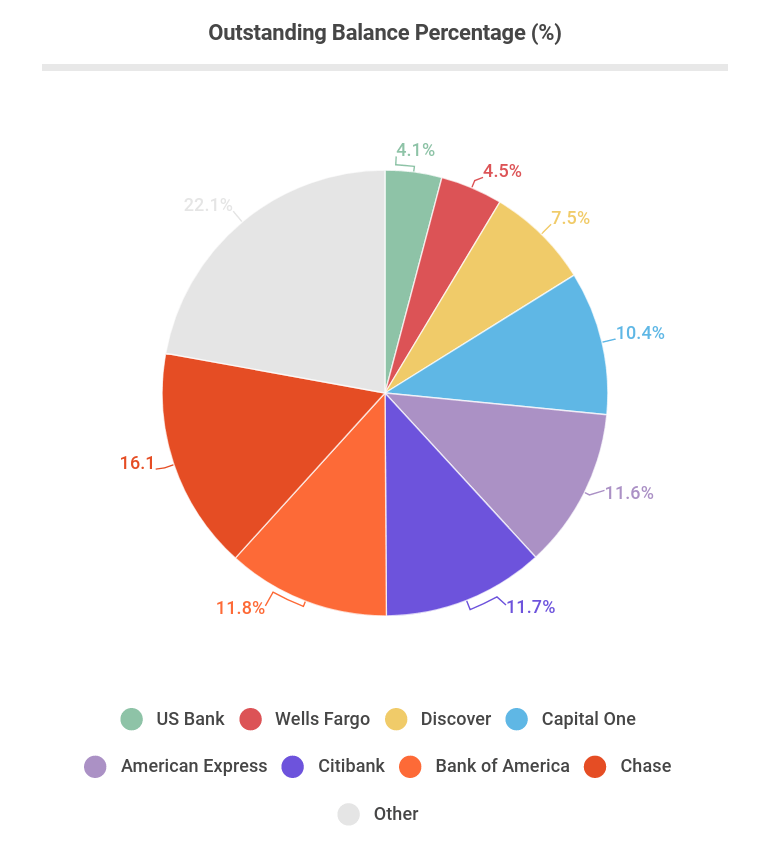 In the table below you’ll find an overview of data recorded in 2018, 2016, 2014, and 2009, as well as a list of banks that issue credit cards in the US ranked by market share based on outstanding credit balances. 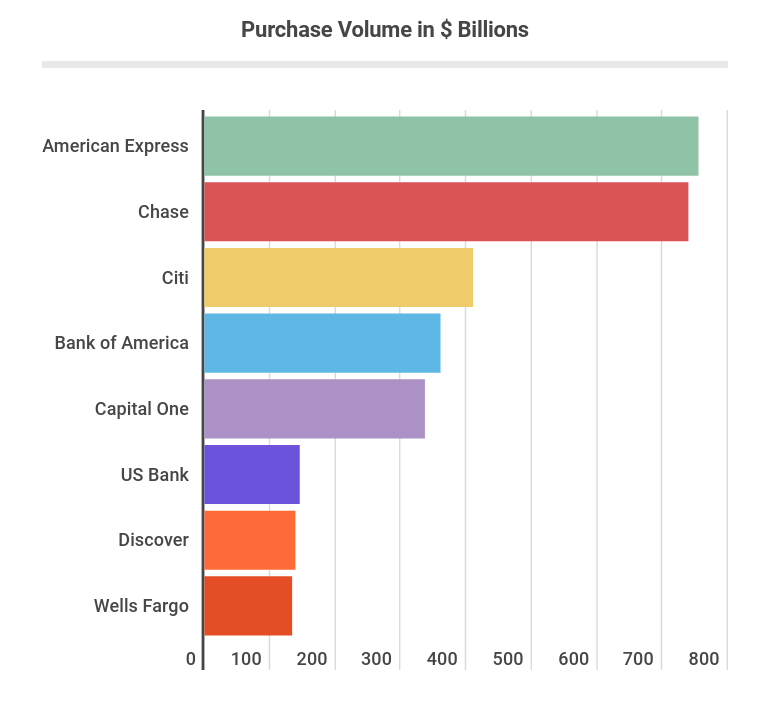 The table below ranks the top credit card issuer brands: American Express, Bank of America, Barclays, Capital One, Chase, Citi, Discover, Synchrony, US Bank, and Wells Fargo. The issuers are ranked according to purchase volume between 2011 and 2018.

Much like general-purpose credit cards, store cards or private-label credit cards are used to buy products and services using credit. These are paid off at the end of the billing cycle. The only difference is that purchases with store credit cards can only be made within a certain chain of stores.

The card’s main advantage is that it comes with relatively loose credit score requirements. Its biggest drawback is that interest rates are usually higher than those of a general-purpose credit card.

Based on the Fed’s Report to Congress on the Profitability of Credit Card Operations of Depository Institutions, store credit card payments accounted for 8.5% of all credit card transactions by number in 2018. The total dollar value of private-label credit card purchases totaled $340 billion, while a single-store card purchase averaged $89 that same year. 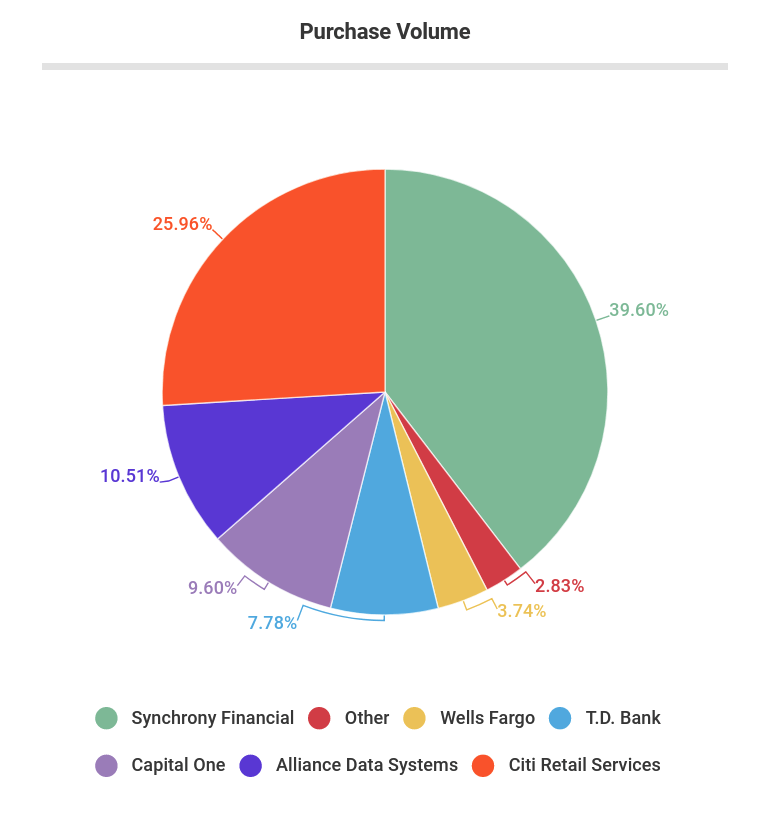 How many credit cards does the average person have?

Based on the Experian Consumer Credit Review published in 2019, the average American has four credit cards. The same report revealed that New Jersey residents have the highest number of credit cards, 4.1 on average. Meanwhile, residents in Mississippi and Alaska carry the fewest credit cards (2.8 on average).

How big is the credit card industry?

According to the Nilson Report published in February 2020, four major card networks - Visa, Mastercard, American Express, and Discover - generated $3.966 trillion in credit card purchase volume in the US in 2019. US credit card market data included in the same report shows that there were 44.6 billion transactions made with 690.9 million credit cards in 2019.

Which credit card company has the most customers?

Data on credit card market share by network based on purchase volume shows that Visa and Mastercard accounted for 75% of all credit card purchases in 2019.

Which country uses credit cards the most?

A growing number of consumers are using credit cards for financial transactions. The list of countries where credit cards are being used much more often than cash is also getting longer and currently includes Sweden, Canada, the UK, the US, France, Australia, Japan, and China.