Healthcare Spending Statistics: How Much Does America Pay to Stay Healthy? 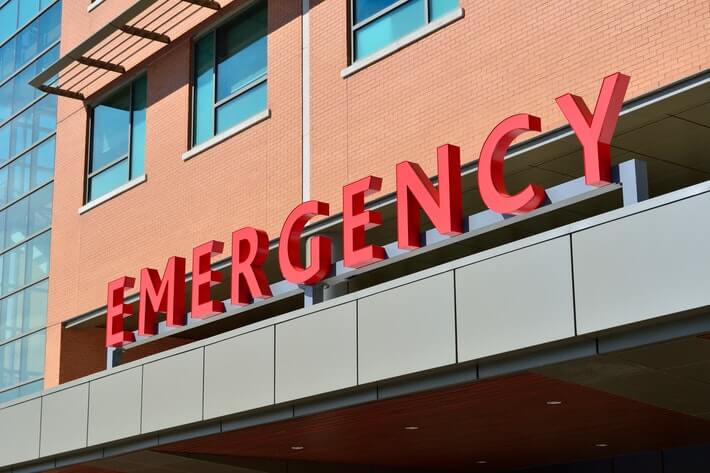 Americans know what’s right. Freedom of the press. Equal opportunity for all. Individualism and independence. We are ambitious and idealistic, we are proud, and in our heart of hearts, we believe that helping our fellow man is our moral duty. And yet — the United States is the only wealthy country in the world not to guarantee tax-supported healthcare for all.

Our country’s healthcare spending tops the charts. We pay our doctors excellent salaries, our hospitals are incredibly well-equipped, and we provide good service to millions. But more than 27 million Americans lack any form of health insurance. Their futures are based on a gamble that they won’t face a catastrophic accident or suffer a long-term illness.

Despite all our money and all our skill, it seems we can’t take care of our own. Compared to other wealthy countries, our infant mortality rates are high, our life expectancy rates are low, and we can’t provide basic care to those in need. So if we’re spending all that money and still failing all those people, where is all the cash going?

According to the nonpartisan, nonprofit Committee for a Responsible Federal Budget, America has the highest health care spending in the world.

This means that nearly 8% of the country’s entire economy is devoted to healthcare. It was $1.5 trillion in 2017, but federal US spending on healthcare keeps increasing. It’s forecast to reach $2.9 trillion by 2028.

On average, that’s how much it costs to keep an American citizen healthy for one year. Our US healthcare spending breakdown indicates that most of this cost goes to cover salaries for medical professionals.

That’s not a huge number, but compare it to the 14.3% figure from 2009, a year before Obamacare was introduced. In America, most people rely on private health insurance. About 10% of the population has no insurance at all.

If you get a heart attack, it will cost an average of $20,175 to get treated in a hospital.

If you break a leg, you’ll pay an average of  $16,976, and if you get pneumonia, you’ll pay $9,793. Of course, healthcare spending by state varies, but you’d better have a good insurance policy if you don’t want to pay for all of this out of your own pocket.

Medical bills are a factor in 18%–26% of all bankruptcies.

Maine Law Review reports that 18% to 26% of debtors who filed for bankruptcy “agreed” or “strongly agreed” that medical expenditures played a factor in their bankruptcy. Massive medical bills push a lot of people into debt. Some are forced to file for bankruptcy just to keep afloat. 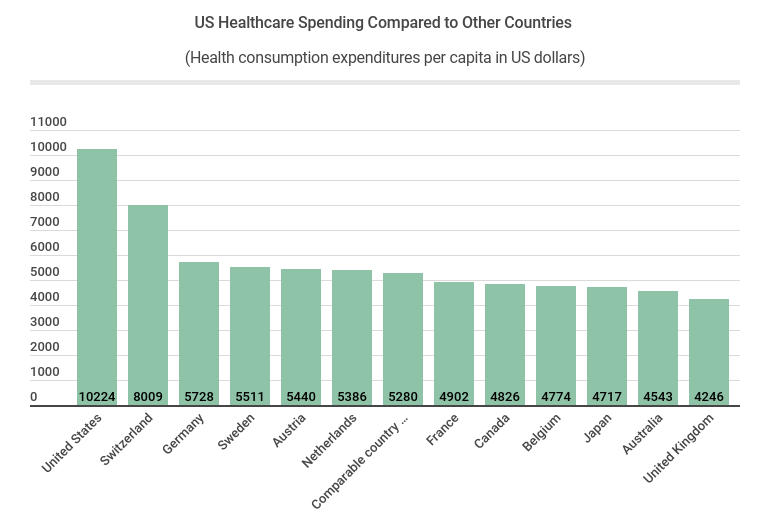 The US spends more on healthcare than any other developed nation, and yet it has the lowest life expectancy and the highest infant mortality rates.

US healthcare spending is high, and the country doesn’t have much to show for it. JAMA researchers compared America with 10 other high-income countries around the world: Australia, the UK, Canada, Germany, France, Japan, Sweden, Denmark, the Netherlands, and Switzerland. In 2016, America spent 17.8% of its GDP on healthcare. Other countries ranged from Switzerland, where healthcare costs accounted for 12.4%, to Australia, which spent 9.6% on healthcare.

If America can’t protect its people, then why does healthcare spending by country indicate that it spends more than anyone else? Where is all that money going?

Why Is American Healthcare so Expensive?

With 57.6% of the population overweight or obese, 647,457 people dying from cardiovascular disease every year, and 598,038 people dying from cancer, US spending on healthcare almost seems justified. But 18% is more than twice the amount other developed countries pay. What gives? Are Americans simply that sick?

Hardly. In truth, there are several reasons why healthcare is so pricey. Expensive medication, expensive procedures, high salaries for doctors and nurses, and exorbitant administrative costs all contribute to the problem.

Wondering how much the country spends on all of this? We break it down in the next few stats.

Administrative costs accounted for 8% of total healthcare spending in the US in 2016.

In other countries, the numbers range between 1% and 3%. American doctors report a high level of “administrative burden.” Marking clinical data reports and resolving insurance claims not only takes a lot of time and effort for physicians, but it also costs a lot of money.

Medication is incredibly expensive in America, and a lot of people simply don’t have the funds they need to buy life-saving medicines.

Here’s an example: An average year’s supply of insulin for a single person with type one diabetes was $2,864 in 2012. In 2016, the average cost was $5,705. Increasing the price of drugs like insulin is extremely dangerous. Without the funds to buy them, people can die (and they definitely do).

Another thing that drives up the cost of healthcare in the US is high procedure prices. While the expertise of American doctors certainly can’t be disputed, the costliness is driving up outgoing medical tourism. Americans travel to Brazil, India, Mexico, Turkey, and Thailand because they can get procedures done for a fraction of the price. According to the American Journal of Medicine, 1.4 million Americans traveled outside of the US for procedures in 2017, compared to 750,000 in 2007.

Healthcare Spending in the Future

Healthcare is a complex subject in the US. While politicians argue over how to approach the problems of rising healthcare prices, average Americans are rationing insulin, selling their cars to pay for last year’s unexpected hospital stay, and arguing about pre-existing conditions with their insurance companies.

The bottom line is this: We need to find a way to take care of our own. Whether it’s through a better government spending plan, advanced technology that can cut down costs, or something else entirely, our people deserve to have their health protected.

FAQ
How much does the US spend on healthcare? +

In 2017, the US spent $3.5 trillion on healthcare. Healthcare spending per capita was $10,224. Healthcare spending as a percentage of GDP was 18%. Wealthy countries do tend to spend more money on their citizens than impoverished countries, but America doesn’t have a great track record on how the budget is utilized. For example, 8% of total US healthcare spending goes to administrative costs. Physicians have to spend a large chunk of their time filing paperwork and interacting with healthcare plans, and this kind of effort usually leads to physician burnout. While GPs earn more than $200,000 on average, depression and anxiety are common problems faced by American doctors who have to wrestle with paperwork instead of helping their patients.

What country pays the most for healthcare? +

That would be America. United States healthcare spending surpasses spending in every other country. Even well-developed nations spend much less and they can still afford high-quality care. For example, Switzerland spent $8,009 per capita in 2017, compared to America’s $10,224. The United Kingdom spent $4,246, Canada spent $4,826, and Australia spent $4,543.

Bear in mind that comparing countries is complicated. Each one has different social and political attributes that contribute to spending, and the country’s overall economy plays a huge role in how costs are calculated. For example, medication in America is more expensive than anywhere else, and we also have the best-paid doctors in the whole world.

How much does each country spend on healthcare? +

For your convenience, here’s a quick, handy list of countries and how much money they spend on healthcare. We also have a table that compares government spending on healthcare by country.

Average 2017 spending on healthcare per capita +
Which country has the best healthcare? +

It’s difficult to measure healthcare quality because it depends on several factors (like healthcare spending), but the Best Countries 2019 global report can give us a good insight. This is a study that compiles data on 75 metrics from 20,000 citizens representing 80 countries. The study is done by the Best Countries portal in partnership with US News & World Report, BAV Group, and the Wharton School of the University of Pennsylvania. One of the subcategories is called Quality of Life, and one of the measures is how well developed the country’s public health system is. According to this study, here are the top ten countries based on the quality of their healthcare:

America isn’t on the list because it ranks 19th.

Who pays for healthcare in the US? +

Is healthcare free in the US? +

No. For the most part, healthcare is not free in the US. There are no services like the UK’s National Health Service, and most people are covered by private health insurance. However, employers often cover healthcare for their employees, and there are government-funded programs like Medicare.

How much would it cost to have free healthcare? +

Healthcare spending is definitely a hot topic in the US. Politicians have been trying to answer this question for years, and they still haven’t reached a conclusion. Free healthcare would almost certainly require a big tax hike, but overall spending might decline. The end result would be that millions of people would get access to life-saving health services.