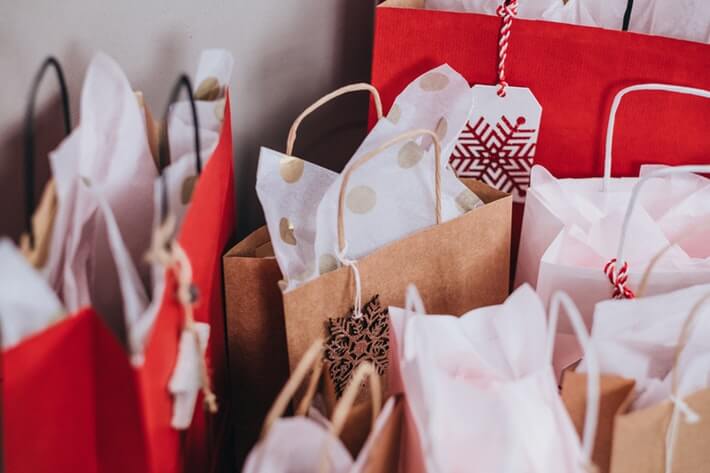 The holiday season is a joyful period, an opportunity to reunite with friends and family, to enjoy the company of loved ones as you count your blessings.

You’ll count extra blessings if you make your living in retail sales. For retail,  similarly to Valentine's Day and other similar events, the holidays are the prime business season. Forget the spirit of Christmas - the spirit of spending is where the money is!

That’s why it’s important for retailers to understand the psychology behind the decisions people make during this period.

This page is a comprehensive compendium, a guide to the most important holiday spending statistics, all in one place. We focused mainly on winter holidays, but you will see that we’ve briefly touched on other American holidays like Thanksgiving and Halloween as well.

US holiday retail sales totaled more than $1.1 trillion in 2019.

This flurry of festive spending accounts for more than a quarter of the entire year’s retail revenues, Deloitte says. Many of those sales are concluded in the 525,000 seasonal workplaces that spring up to support the spirit of giving, according to holiday statistics.

American households invested an average of $1,536 on holiday spending during the 2018 Christmas season.

Christmas statistics published by Deloitte indicate that gifts accounted for about one-third of that total, while another 40% of the $1,536 average holiday spending was devoted to “experience purchases”: travel, restaurants, and other forms of socializing away from home.

US consumers spent an average of $638 on holiday gifts for family, friends, and coworkers in 2018.

Not surprisingly, most of that - $506 - went toward gifts for family members. Christmas spending on food makes a $108 dent in the budget, while decorations cost the average American household $58.

Shopping for Christmas in the US starts on November 1 for 42% of consumers.

A lot of the stress comes from starting Christmas shopping too late - 15% start looking for presents for their loved in the first two weeks of December, while 2.7% start even later. That’s no way to create a jolly, merry atmosphere.

Consumers who begin their holiday spending before the end of October end up spending $1,761 on average - about 28% more than late shoppers.

Data suggests that you can save money by postponing your holiday shopping. Those who begin shopping in the second half of December spend an average of just $1,284.

Americans spent $128 billion in online stores during the holiday season of 2018.

Online shopping statistics per year show a 19% rise in comparison to 2017.

More and more shoppers are discovering the benefits of online shopping. An interesting e-commerce statistic: 94% of online shoppers identify free shipping as the perq that they most appreciate from e-stores. Fifty percent of shoppers buy items online and pick them up in person.

More than half, 51%, of consumers do at least some of their Christmas shopping in discount stores.

Asked “What percentage of your holiday budget do you expect to spend in physical store?” consumers answered 36% on average.

The main advantage of physical stores, they say, is the ability to interact with products directly. Inspiration for what to get, the general festive mood of department stores, and ease of returns also contribute to the ongoing popularity of brick-and-mortar stores.

Cyber Monday 2018 saw more sales than Black Friday. It broke the record for the biggest sales day in US history with $7.9 billion in customer sales.

Super-late Christmas shopping was the name of the game for 134 million people on Super Saturday 2018.

Super Saturday is the last Saturday before Christmas. Retailers have begun offering huge last-minute discounts on Super Saturday sales, making it the biggest Christmas sale for those who wait until the very last minute. Some estimates say that $26 billion or more was spent on Christmas shopping on December 22, 2018.

The top-selling Christmas gifts are clothing and accessories, with 59% of people planning to give them to their loved ones.

Gift cards are a close second, purchased by 56% of consumers. While it can be considered a lazy gift, a gift card can be a safe bet for people you don’t know all that well. Toys for the little ones account for 41% of presents.

Younger people most often give books and other media.

Consumers are most likely (79%) to make an online purchase on a laptop or desktop device.

More and more internet traffic is moving to mobile devices, but not online shopping. Studies suggest that people use their phones to track order status, but prefer to select options using a big screen so they can see product details. When it comes to finalizing a Christmas purchase by clicking the check-out button, people feel most comfortable using a computer, according to holiday statistics.

Holiday shoppers are very receptive to promotional offers - 82% of them are influenced by holiday discounts and other promotions.

The promotional offers that proved most effective in stimulating holiday spending in 2018 were straight price discounts, researchers say, with 95% of respondents citing it as the most appealing. The next desirable discount is free shipping (75%), while added gifts are important for 52% of Christmas shoppers.

Christmas is a time of giving to others: 70% of consumers report they will engage in some sort of charitable activity.

Inside of each of us there is a good person, and Christmas seems to be that good person’s season of choice. Financial donations are the preferred way of giving back for 36% of people, while donating items such as clothes, toys and food is favored by 35%.

A little more than 50% of consumers plan to buy a Christmas gift for themselves, holiday spending statistics show.

While it is important to give something back to those who are less fortunate, there’s nothing wrong with treating ourselves to a gift or two after a year of hard work.

In a 2012 survey, 37% of respondents said they would be buying themselves a present. By 2018 that number had risen to 51%. Food and liquor are the most popular self-gifts, with clothing a close second. Shoes, books, and cosmetics follow.

People from low-income households prefer shopping in physical stores during the holiday season compared to people with middle and high annual incomes.

When asked whether they prefer online or physical stores, 42% of people from low-income homes said they prefer brick-and-mortar stores, while a little over 30% of high- and medium-income consumers said the same.

It’s easy to predict that people with lower incomes are more likely to put higher emphasis on quality and price when doing their holiday shopping, and Christmas spending statistics support the prediction.

This holiday shopping trend from 2018 is probably spearheaded by younger consumers: 66% of shoppers say they are ready to pay extra for environmentally safe products.

Gen Z-ers and millennials are getting more and more eco-conscious - 87% of Gen Z-ers and 75% of millennials agree they would pay a bit extra for a product that is ecologically sustainable. The percentage goes down as people get older. Almost half of senior citizens say they would not pay more.

On average, people say they would pay 6% to 10% extra for an environmentally safe product.

More than 175 million Americans participated in Halloween festivities, with the average consumer spending about $86 dollars.

American spent more than $3 billion on costumes. The most popular children’s costume was a princess, while adults favored the witch look. The most popular costume for pets? About 11.2% of people made them look like pumpkins. Overall, 68% of Halloween celebrants bought costumes.

Candy was given out by 95% of people who celebrate the holiday, and Halloween spending statistics show that giving treats instead of getting tricked cost American households a total of $2.6 billion.

Independence day is one of the most important and beloved holidays for Americans. Barbecues, fireworks, hot dogs, beer - all seasoned with pride for the red, white, and blue in the sweetest part of summer.

According to a study conducted before the big day, Americans were forecast to spend $8.4 billion on food and drink on the 4th of July, statistics show, with $1.6 billion spent on beer and wine alone.

Men spend more than twice as much as women on Valentine's Day gifts: Men spend $229, while women spend $97 on average.

Young people are boycotting Valentine's Day in increasing numbers, a reaction to what they see as the commercialization of what would otherwise be a fine holiday. This factor, added to the number of single people with no one to celebrate with, accounts for the fact that only about half of Americans observe Valentine’s Day. Among those who don’t celebrate, 23% go so far as purchasing “anti-Valentine's Day” gifts.

Still, the holiday facilitated the circulation of $20 billion in cards, flowers, candy, and jewelry in 2019 according to the National Retail Federation Valentine's Day overview. Candy and flowers are the most popular gifts, with an average of $162 spent celebrating love in the middle of February.

The 79% of American consumers who celebrate Easter will spend $151 on average.

Chocolate eggs and bunnies, egg baskets, bunny ears - Easter is one of children’s favorite holidays. American consumers spent a total of $18 billion on Easter in 2019, a $6 billion increase compared to 10 years ago according to holiday spending statistics. The biggest chunk of that money went toward food - $5.72 billion.

Only half of the people who celebrate the holiday report going to Church on Easter Sunday.