How Many Teslas Have Been Sold? 25+ Tesla Car Sales Statistics & Facts

It’s hard to have a conversation about modern technology and electric vehicles without mentioning Tesla. After all, this is the company that made electric vehicles cooler and more accessible while driving digital innovation in the automobile industry.

But how many Teslas have been sold in recent years, and how much of the market has the company’s eccentric CEO, Elon Musk, managed to conquer? The following article takes a closer look at this American electric vehicle and clean energy giant.

While Tesla is certainly a household name, it’s not the only electric car manufacturer that’s launching innovative vehicles. The latest car sale statistics reveal that Tesla’s market share shrunk between 2020 and 2021.

The said, the company still has a firm grip on the market despite the growing list of carmakers that are working to replace gasoline and diesel with electricity.

Refinancing your Auto Loan could lower your monthly payments.
An auto refinance loan is a secured loan used to pay the existing balance on a current car loan. Click below to get started.
Get Started
ADVERTISEMENT

Tesla held 14.55% of the world’s electric vehicles market share in the first half of 2021.

The final Tesla sales figures for the third quarter of 2021 show that deliveries were up 73% year-over-year. Of the total number of vehicles sold, 232,102 were Model 3 and Model Y, which marks an 87% year-over-year increase, and 9,289 were Model S and Model X. Unfortunately, Model S/X YOY sales are down 39%.

Between January 2021 and June 2021, Tesla accounted for 66.3% of all new EV registrations. But those figures are notably lower than the previous year when the Silicon Valley automaker had 79.5% of market share.

The losses can be explained by the gains of other car manufacturers, including Ford, which grew by 5.2%, and Audi, which expanded its market share by 3.3% year-over-year. These are some serious competitors, and Tesla’s ability to maintain the largest portion of market share underscores its status as a leading global brand.

In 2008, Tesla launched the Roadster, its first battery-powered car. Today, the company produces a range of vehicles, and some of its most popular models include Model S, Model 3, Model X, and Model Y.

Tesla has produced more than 1.91 million vehicles since 2009.

Tesla’s annual production rates have been growing steadily over the years. In 2014, the company produced only 35,000 vehicles, while the total number of vehicles manufactured in just the first six months of 2021 stood at 386,759.

Between 2017 and 2020, Tesla’s annual manufacturing capabilities increased by 5.06x. Four years ago, the company needed 181 days to produce 50,000 cars. Today, it can assemble that same number in a little over a month. This is another important indicator of the company’s impressive growth in a relatively short period of time.

The Tesla Model 3 was by far the most popular electric vehicle in the world during the first half of 2021. The second spot went to Wuling HongGuang Mini EV, with 212,516 in total sales. This signals the growing popularity of the Chinese brand, which is among one of many company’s challenging Tesla’s supremacy.

According to Tesla sales statistics, Tesla Model Y is in third place in terms of sales during the aforementioned time period. This means that the combined vehicle sales of Tesla’s Model 3 and Model Y are far greater than the number sold by China’s Wuling.

These figures also eclipse the sales numbers of every other electric vehicle manufacturer such as Volkswagen, BYD, Hyundai, Renault, and Nissan.

Tesla’s best-selling EVs internationally in 2021 are Model 3 and Model Y, with more than 911,000 deliveries.

The 2021 Tesla international sales of its most popular Model 3/Y climbed to 911, 208. When combined with the sales of Model S/X, the total number goes up to 936,172. And with hundreds of thousands of additional units being sold every quarter, Tesla is expected to surpass the one million mark in 2022.

The company produced 292,731 units of Model 3/Y during the last three months of the year. Meanwhile, the production rate of Model S/X was significantly lower, with only 13,109 units produced and just under 12,000 deliveries.

The best-selling EVs in the US during the first few months of 2021 were Tesla’s Model 3/Y. The company delivered 48,354 Model Y units while Tesla Model 3 sales hit 26,983 units during the same time period.

The Tesla Model 3 was the second most popular electric vehicle in China during the first half of 2021.

Tesla China sales figures reveal that the company sold 92,755 Model 3 and 59,900 Model Y vehicles in that country. And although these numbers are impressive, the Wuling Hongguang Mini EV is still the dominant electric vehicle on the Chinese market, with 253,704 units sold in Q1 and Q2 2021.

The vehicle’s popularity probably has a lot to do with its price tag. The Mini EV is one of the world’s cheapest electric vehicles with a base price of just $4,500, which means you don’t exactly need a big car loan to snag one.

Model 3 was the most popular Tesla car in Europe in the first half of 2021.

In Europe, the Tesla Model 3 is the company’s only vehicle to make an appearance in the top 10 most sold plug-in electric cars, with 76,440 units delivered across the continent.

The Volkswagen ID.3 was the second most popular option among Europeans, with 44,625 units sold, and the Renault Zoe reached 38,872 in sales. This makes Model 3 the most popular electric vehicle in Europe.

Have you ever wondered who’s actually buying Tesla vehicles these days? A recent study by Hedges & Company offers some valuable insights into your typical Tesla owner. Here’s what they found:

Tesla Model X owners have an average household income of $143,177 per year.

Tesla Model 3 owners have an average household income of $128,140 per year.

Similarly, the median age of a Model 3 owner is 46 years old.

The Tesla Model X has a higher percentage of female owners.

This makes Model X the most popular Tesla vehicle among female drivers. Model S trails behind slightly, and Model 3 is the least popular among women.

Interestingly, the exact opposite seems to be true for male drivers. Model 3 is the most popular, followed by Model S and Model X.

88% of Tesla Model S and X owners are also homeowners.

The majority of Tesla Model S and X owners also have their own homes. This is a clear indication that most people who can afford one of these vehicles are financially stable.

Many Tesla Model 3 owners don’t seem to have the same level of financial security as some of their counterparts. In fact, the percentage of Americans who own their own home ranges between 64% and 67%, which means that Tesla Model 3 owners are less likely to own a home than the general population. 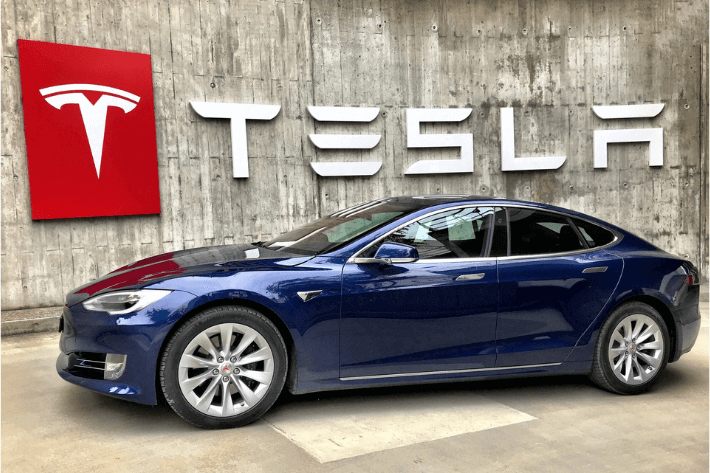 The Man Behind Tesla: Elon Musk

So what about the eccentric CEO behind the electric vehicle giant? How much money does Elon Musk have? Before Tesla, Musk co-founded the online bank X.com. The bank eventually merged with Confinity Inc. in 2000, evolving into what we know as PayPal today. That company was eventually bought by eBay in 2002 for $1.5 billion.

This was the same year that Musk would go on to launch SpaceX, an aerospace manufacturer and space transport services company. It wasn’t until 2004 that he joined Tesla Motors, now known as Tesla, Inc. He became CEO in 2008.

Elon Musk’s total net worth is around $266 billion.

Musk controls a healthy portion of Tesla’s stock, and he has assets in SpaceX and other companies. His total net worth is estimated to be around $266 billion. Here’s a look at how much some of his billionaire counterparts are worth:

These astronomical figures may be difficult for some people to digest, but the truth is that Musk’s current wealth is far greater than the GDP of many countries around the world.

During the 12-month period between April 2020 and April 2021, Musk was making an average of $16 million per hour or $4,433 per second. And with the Tesla stock price continuing to climb in 2022, Musk’s fortune is only expected to grow in the coming year.

Tesla Net Worth, Stocks, and More

Tesla is certainly one of the most valuable companies in the world today, but how costly is it to invest in the company?

With its $1 trillion market capitalization, Tesla is now among an elite group of companies, including Google parent Alphabet, Amazon, and Facebook.

Tesla was trading at just $17.00 per share when the company launched its first initial public offering in 2010.

This marked a 28.31% increase from Tesla’s earnings in the previous year. At the end of October 2021, Tesla had already generated more than $31 billion.

Tesla has experienced amazing growth over the past decade. Here are their annual revenue numbers from the previous years.

The three biggest mutual funds invested in Tesla are AGTHX, VTSAX, and VFIAX.

The top three mutual funds that have the most Tesla shares are:

While Tesla primarily designs and manufactures electric vehicles, the company has acquired a number of other businesses to help boost its manufacturing capacity and operational speed. These key acquisitions have greatly helped Tesla’s growth over the past few years.

These stats confirm Tesla’s status as the leading brand in the electric vehicle industry. The company’s contributions to advancing the technology in this field are undeniable, and its products have taken the world by storm.

Perhaps unsurprisingly, Tesla holds a significant portion of the electric vehicle market share not just in the United States but all over the world. Meanwhile, the company’s outspoken CEO is the world’s richest man, known for revolutionizing electric cars, artificial intelligence, and even space tourism.

How many Teslas have been sold in the US?

Here are the figures for the number of Tesla vehicles sold in the U.S.:

How many cars has Tesla sold since its inception?

Tesla investor reports show that the company has sold 1,917,450 electric vehicles. In addition, 32% of all Tesla vehicles sold since 2016 were sold in the first half of 2021.

Where are most Teslas sold?

Tesla’s best-selling EVs internationally in 2021 are Model 3 and Model Y, with more than 911,000 deliveries. When combined with the sales of Model S/X, the total number goes up to 936,172. Tesla is expected to sell more than one million vehicles in 2022.

How many Tesla Gigafactories are there?

Currently, Tesla has four fully-operational facilities, with three of them known as Gigafactories. Their main factory is located outside of San Francisco and is considered the original factory for the company’s electric vehicle production. Two of the Gigafactories are located in the United States, and one is in China. They are located in Nevada, New York, and Shanghai.

How many cars a day does Tesla make?