Credit Score Statistics: How to Interpret - and Boost - Your FICO Score 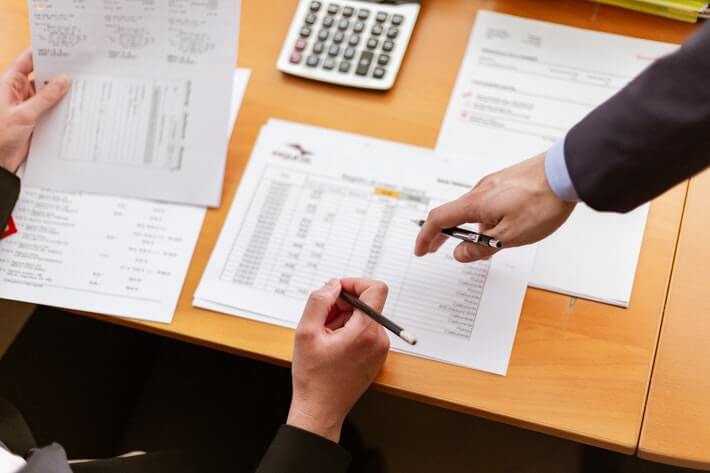 Your credit score plays an enormous role in your daily life. It can determine the interest rate you pay for credit cards, car loans, and mortgages. It can make the difference between moving your family into the house you love and having your mortgage application rejected.

Some potential employers even check applicants’ credit details to get a better picture of how responsible they are. Your credit score range can affect whether you’ll score your dream job or keep waiting tables.

With all this competition for credit, houses, and even jobs, it’s important to understand your own situation and how it compares to the average credit score.

Filling in the Credit Score Blanks

Like your Social Security number (SSN), your FICO score is one of those numbers you just need to know. Those three digits play a huge role in determining your eligibility for loans and the interest rates you pay.

The first thing you should know is that American credit score statistics are, more often than not, compiled by a company called FICO. FICO uses the information in your credit report to create a numerical representation of your creditworthiness.

Lenders and creditors use this information to determine whether your credit score rating means that you’re reliable enough to repay borrowed funds. They then decide whether or not they will approve your application and, if so, what interest rate they will charge. If you have a lower credit score, lenders consider you less likely to repay any loans you take out. You’ll pay a higher interest rate as extra insurance to the lender. However, there are lenders and lending platforms specialized for the individuals with low credit score.

What is considered a good credit score?

The FICO score chart ranges from 300 to 850, with 850 representing the highest score possible. We can sort these into five categories:

This data represents a record-high percentage of people who rate over 800. Financial experts attribute this change in credit scores to a lower delinquency rate and the fact that fewer Americans are taking out loans they can’t afford. As a result, fewer people are falling behind on their payments and more are reaching the 800 credit score that was once out of nearly everyone’s reach.

This is a positive change after a decade or so of turbulent times. It’s clear that credit scores are generally rising. Let’s dig a little deeper by examining the credit score statistics distribution in recent years: 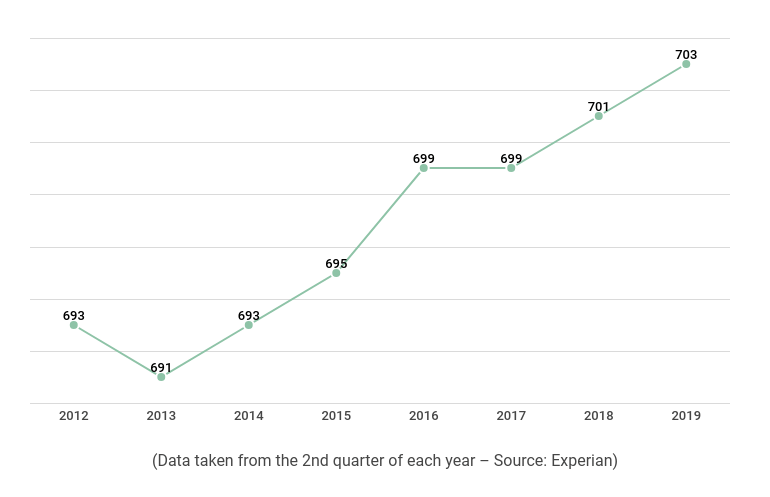 In October 2009, the average FICO score hit a low of 686, shortly after the Great Recession. However, consumers have steadily regained what is now known as American credit health and have been consistently climbing for the past decade.

In the years following the Great Recession, bad credit score statistics became the new norm. Those with substandard scores struggled in almost all aspects of life. Perhaps these were the most important factors that pushed the population to pursue more favorable numbers on the average credit score scale.

According to Experian's annual State of Credit survey, 2017 was a year full of contradictions for FICO score statistics. Higher average credit scores and higher debts offered a multitude of reasons for optimism and caution as 2018 began.

The number of Americans with good credit score statistics has grown consistently. Even though 2018 had its highs and lows, the trend held steady.

It is important to note that there are two metrics of the statistics of 2019 provided by FICO and VantageScore. Check out these 2019 credit score statistics:

These numbers are beneficial for American citizens since they open the door to an improved way of life. For instance, the minimum FICO score required to qualify for a conventional mortgage is 620, and with this credit score report you can see that lots of people are qualifying.

In a nutshell, these FICO and credit score statistics offer many opportunities when it comes to borrowing money, and they can save Americans thousands of dollars in interest.

According to experts, this statistic was predictable. Once the national average score improved and over 20% of Americans earned an exceptional credit score - with a nontrivial percentage of the population with credit score over 800 - the next step in economic development is a decline in lower scores. This is exactly what happened in the second quarter of 2019, and according to financial experts, the reductions will continue.

One of the biggest differences in credit scores can be seen among different age groups. Younger groups tend to have lower credit scores for several reasons. One reason is obvious: a shorter credit history. The good news is that the average FICO score tends to improve with age. If you have ever asked yourself, “What is the average credit score by age in the United States?” Well...check out the following:

Individuals in the 30 to 39 age group are the largest group of consumers with a 650-673 credit score.

There are several reasons Americans in their 30s tend to have lower scores. That is, after all, when Americans begin facing big, expensive life events: weddings, mortgages, failing parental health, parenthood, and all the rest. A study about American credit score statistics by age, points out that this is the age group with the largest amount of credit card debt.

Younger individuals get bad scores too:

Following the 2009 CARD Act, these individuals are no longer desirable candidates for any sort of loans, or even opening new credit card accounts. As a result, many young individuals are far from learning “how to build you credit” lessons. The mistakes they make drive the national average credit score down.

Americans between the ages of 50 and 59 hold the second spot when it comes to the FICO score national average. Check out the following average credit score by age:

Americans aged 50 to 59 have the second-highest average FICO score: 706.

By the time they reach their late forties, most Americans have learned about the use of statistics in a credit score file and how to make timely payments on their financial obligations. Average scores continue to improve with age:

People over age 60 have the highest average credit score: 749.

One of the factors FICO includes when determining one’s credit score is the percentage of total available credit an individual is using on a monthly basis. The general rule is that the credit utilization should be kept below 30%, otherwise the credit score will gradually fall. Unfortunately, another rule of life complicates things: the lower one’s income, the larger the need for credit for day-to-day expenditures.

In the fourth quarter of 2018, a little over 38% of perfect FICO scores were held by people with an annual income of $75K or less.

This data confirms that your annual income doesn’t play an overwhelmingly large role in determining your credit score. Obviously, having more money can help you pay your bills, but building the highest credit score comes down to paying your bills on time every month and limiting your credit utilization or the total amount of your debt compared with total credit available.

What is an average credit score in America? That’s a surprisingly tough question, because the lowest credit scores in America can be found in the southern states - Tennessee, Arkansas, Louisiana, and Alabama - but even those statistics are not precise. Still it is certain that regional differences account for differences in what is an excellent credit score in different states.

Here is the list of average FICO scores by state:

How Are Credit Scores Calculated?

There are many ways to learn how to manage your resources without sliding into debt. If you understand how your credit score is calculated, you will be empowered to sort out the factors that have the largest impact and go after a FICO score of 800 even though it may seem impossible.

FICO scores are calculated through examination and analysis of data found in your credit file. The score takes into account major factors such as your payment history, age of credit history, and level of credit utilization to produce a number that reflects your creditworthiness. Knowing how the analysis is performed can keep you out of debt and on the good side of credit score statistics.

Here are five types of information in your credit report along with the amount of influence each has on your credit score:

FAQ
What percentage of the population has a credit score over 850? +

According to FICO, less than 1% of the population can maintain a credit score of 850.

What percentage of the population has perfect credit score? +

Less than 1% of the population has the perfect FICO score of 850. At the moment, over 20% of Americans have a credit score over 700.

According to FICO, consumers who fall between 720 and 850 qualify for lower interest rates and better credit card deals.

How can I quickly raise my credit score? +

It takes nine months to 2.5 years for a consumer to bounce back from the impact of lower credit score results.

Financial experts say that the best way is to pay your bills on time. Missing the payment of one monthly bill can lower your credit score by as much as 100 points.

A 650 FICO score is considered to be in the “fair” range.

What is a good FICO score? +

Typically, a good FICO score is considered to be above 670.

How much will my credit score increase if I pay off collections? +

If the collection knocked your FICO score down, you can expect that many of the points you’ve lost will be regained.

Loans are available for home buyers at practically every credit score. Down payments and interest rates vary according to creditworthiness.

How long after buying a house does your credit score go up? +

If you have a mortgage, this will most likely boost your credit score in the long run, provided you are regular with your payments.

Yes, a mortgage will boost your credit score, but only if you make your payments as agreed.