How To Read a Candlestick Chart

Traders use various types of charts to monitor and analyze market trends, with the candlestick chart being among the most popular ones. These charts were first developed in Japan a century before Westerners invented bar and point-and-figure charts. Traders today use Japanese candlestick charting techniques to track the price of stocks and commodities.

Candlestick charts are unique because they show the open, high, low, and close prices for a security over a given period, which makes them ideal for tracking and predicting price trends. Keep reading to learn more about how to read and analyze candlestick charts.

What Is a Candlestick Chart?

Candlestick charts display information in a way that makes it easy to see the relationships between the opening and closing prices, as well as highs and lows. Each candlestick represents one period (such as one day or one hour), and each consists of four parts. 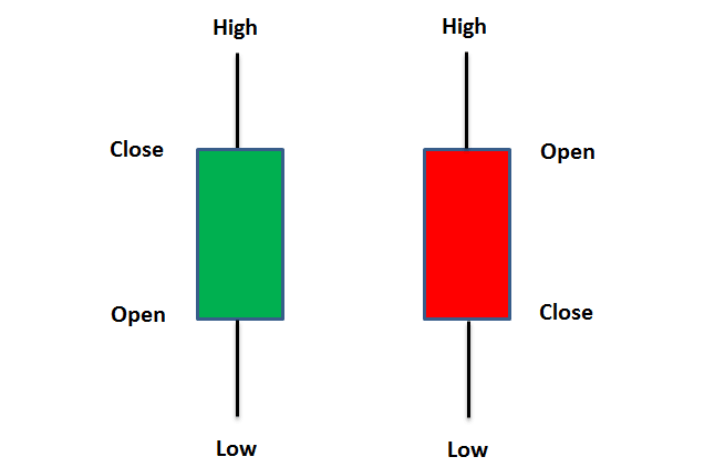 In a nutshell, the upper shadow (straight line) of the candlestick shows the highest price reached during that particular time, while the lower shadow represents the lowest price. The space between the shadows represents open and close prices. If the security closed higher than it opened, the body would be colored green. If the security closed lower than it opened, the body is red.

Note that these colors may vary from one trading platform to another.

Anatomy of the Candlestick Chart

A candlestick chart consists of shadows (also known as wicks and tails), body, and color.

The highest point of the shadow shows the maximum price reached during the trading period, while the lowest point indicates the minimum price. In case the open or closed price is the highest, the upper shadow is absent. The same would apply to the lower shadow if the security opened or closed at its lowest point.

The colored portion of the candlestick indicates the opening and closing prices of the stock. If you’re wondering how to read stock candles, remember the following:

When trading, you should set up a price alert to know when the stock price changes.

The most common types of candlestick patterns are:

The doji candle pattern is similar to a cross, indicating that the candlestick's open and close price were the same. This signifies a neutral trading period that might suggest that a reversal in price movements is coming shortly.

The hammer pattern consists of a long shadow at one end and a tiny body at the other. It typically heralds a price reversal, much like a doji pattern.

Candlestick charting allows us to compare two or more candlesticks, and one of the results we can get from this is an engulfing pattern. This is when there are two candlesticks, one of which is bigger than the other, basically engulfing it. This pattern strongly indicates a price reversal.

Morning and evening stars consist of three candlesticks. The morning star shows an upward trend, while the evening star indicates a downward trend.

A morning star consists of a red candle, a tiny green one, and a more prominent green candle covering at least half the body of the red one. A green candle and two red ones make an evening star.

To learn how to read candle patterns, you must first learn to recognize two basic candlestick patterns showing price movement. These are known as bullish and bearish patterns.

A bullish pattern occurs when the price closes at a higher point than it opened, indicating that the value of the stock or security has increased over time. The most common color of bullish candlesticks is green, but white is also sometimes used to show a bullish candlestick chart.

A bearish candlestick indicates that the price closed lower than it opened, showing a decrease in the value of the stock or security during the trading period. The most common color to indicate bearish candles is red, but black is also used sometimes.

These are the most common bullish candles:

A bullish harami is a small green body occurring within a bigger red candlestick. This pattern happens during downtrends, implying that selling pressure is easing and suggesting the possibility of a bullish reversal to an uptrend. This uptrend could be pending if the bullish harami pattern repeats the next day.

These basic candlestick patterns occur during a downward trend, consisting of a red (or black) candle and a doji next to it. Technical analysis in trading trends treats the bullish harami cross the same way as the bullish harami, foreshadowing a potential upwards (bullish) trend.

A bullish rising tree is another common candlestick pattern that consists of five candlesticks. The pattern consists of two bigger green candles at the beginning and end of the observed period and three smaller red candles in between them. The pattern indicates a bullish reversal, showing that buyers are gaining control over the market despite a certain drop.

To learn how to read a candle chart, acquainting yourself with bearish movements is also essential. A bearish pattern indicates a downward price movement on the candlestick charts. Here are some of the most common bearish patterns:

A bearish engulfing candlestick pattern is the opposite of bullish engulfing, implying that sellers are taking control of the market. The pattern forms during uptrends when a red (or black) candlestick with a bigger body engulfs a green candle, showing that selling is outweighing buying pressure in the market.

Bearish harami is the opposite of bullish harami, indicating that buyers might lose market control to sellers. The pattern appears during uptrends when a red candle appears next to a bigger green body.

Remember to keep analyzing candlestick charts if this pattern appears, but refrain from taking action at first, because although it seems like a bearish reversal pattern, a bullish continuation might ensue.

As you can tell from the name, this candle pattern is the opposite of the bullish harami cross. It takes place during an uptrend, showing that the bears might be gaining ground over the bulls. This pattern is distinguished by a doji within the body of a green candle. The implications of this pattern are the same as with the bearish harami.

The bearish falling tree pattern is particularly helpful for identifying candlestick chart trends. It starts during a downward period and consists of five candlesticks. The pattern begins with a big red candle and ends with another one by the end of the observed period. Three smaller green candlesticks are between them.

A bearish falling tree indicates that sellers are back in control of the market and prices are likely to continue falling.

Reading Candlesticks on a Trading Day

While understanding candlestick patterns on their own seems pretty straightforward, they can be confusing when grouped together on a specific day. The first thing you should note when trying to read candlesticks is the period each one covers, since there are many time frames you’ll need to look at depending on the market's volatility.

Refer to the following table for the most common chart time frames and their markings:

Here’s how to read a candlestick chart for day trading; remember while day trading that a single candle typically cannot provide you with enough information to take action. That's why you should look at candlesticks in groups, depending on your time frame. In the process, you'll see emerging patterns giving you a better idea of what might happen next.

Browsing between frames is like zooming in and out during candlestick chart reading. Say you look at the D1 chart and wish to break it down into H4 charts. In this case, you'll end up with six candlesticks instead of one. Alternatively, if you want to examine a longer period, you can switch from D1 to W1.

So, candlestick charts allow you to spot buy and sell signals within short and extended periods.

How To Read Candlesticks: Pro Tips

Since you're not likely to memorize all the possibilities from the beginning, it's essential to grasp the basic concepts and know what to look for when reading candlesticks. The following pro tips will come in handy.

Learning the essential candle patterns – bullish, bearish, and doji – is the first step in understanding what direction a price movement could take. From there, you'll be able to identify emerging patterns and better understand what's happening in the stock or security market.

Figuring Out the Meaning of the Bar

You also need to know the reason for each candlestick chart pattern. For example, the price stays level for a while and then suddenly forms a large bearish bar. This shows that the sellers are now in charge, and it’s likely that the price will start moving down for the next few bars.

Stock and other asset traders never consider only one piece of information; they use multiple indicators when reading candlesticks to support their decisions and only act when different patterns signal the same direction. The same goes for candlesticks – never make a decision based on a single one. Instead, use them as a confirmation.

For example, a doji mightn't indicate a change in market trend but merely a pause. Traders' emotions and many other factors influence everyday trading decisions, so looking at the bigger picture is always the best approach.

We hope this guide has helped you understand how to read candlestick charts and achieve your trading goals. Remember that you need to take your time, learn the basic patterns, and refrain from relying on a single piece of information while making decisions. The rest will come in time.

Nevertheless, if constantly monitoring and analyzing trends doesn’t sound too appealing to you, consider doing algorithmic trading and letting your computer do the bulk of the work on your behalf.

How do you read a candlestick chart?

What is a candlestick chart used for?

Traders use a candlestick chart to predict future price changes. They identify a trend by analyzing the candlesticks' shape, size, and color, as well as the relationship between different candles.

What is a candlestick chart pattern?