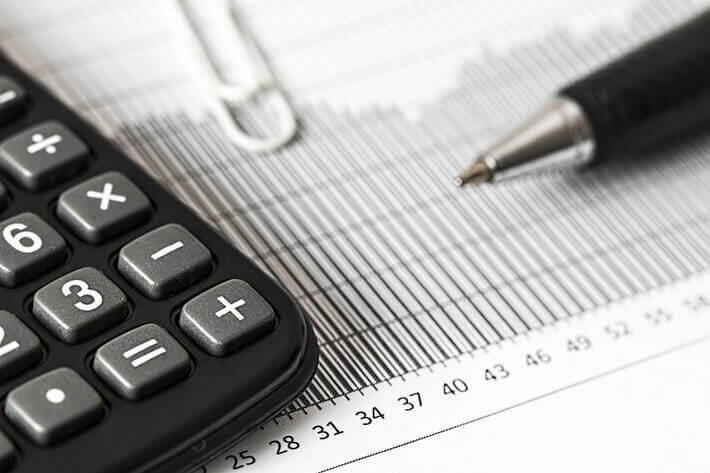 Taxes are stressful for everyone. Taxpayers worry that they’ve paid too much by missing key deductions or they’ve paid too little and will face audits and penalties. Tax law underwent major changes with the passage of 2017’s Tax Cuts and Job Act - and those changes are still being felt.

Here are some of the most interesting and relevant income tax statistics from the past few years. Let’s see if we can spot some trends or useful data points.

US Tax Data: A Complex System

The federal tax code is more than 10 million words long.

The tax code consists of two parts: the 2,412,000-word Internal Revenue Code and federal tax regulations that add 7,655,000 words. And that’s not counting the substantial body of tax-related law that goes hand-in-hand with the code.

44% of taxpayers say they worry about the complexity of the tax system.

Taxpayer statistics reveal different attitudes according to the amount people earn. Among Americans who earn more than $100,000, 55% say they find the tax system too complex. Concern drops to 33% among those who earn $30,000 or less.

72% of low-income Americans don’t know that they are entitled to free tax-filing services.

Income tax stats show that most Americans are unaware of MyFreeTaxes.com, a United Way website that prepares and files taxes for anyone who earns less than $66,000. The site handles both state and federal taxes, no matter how complex, free of charge.

Surveys show that half of Americans earning $62,000 or less per year do their own taxes, and 29% pay someone else to do them, or use tax-filing software. Only 40% of respondents knew about the child tax credit, while fewer than six in 10 knew about the earned income tax credit. Although respondents typically received smaller tax refunds than they were entitled to, half reported that they don’t find tax preparation stressful. Maybe ignorance really is bliss.

Electronically filed tax returns have an error rate of only 0.5%.

United States tax statistics show that most tax returns are filed electronically. On result is that returns have fewer errors. According to the IRS, the error rate for paper returns is 21%. That means a paper return is 42 times more likely to contain errors. As the tax code grows increasingly complex, fewer people each year are willing to risk it.

This information is from an income tax survey conducted by Prosper Insights & Analytics for the National Retail Federation in February 2019. About half (48%) of the respondents said that they expect the same amount as the year before, while 29% expect the refund to be higher. Some 50% said they would add the refund to their savings accounts, while 34% said they would use the money to pay off debts.

59% of people believe the U.S. Government should completely change the tax system.

Taxpayer stats from 2011 and 2015 came up with an identical percentage of people who are dissatisfied with the tax system. Members of both major parties seem to be in favor of a complete overhaul, except that Republicans want it more (66%) compared to Democrats (48%).

IRS statistics confirm that the rich pay most of the taxes. Overall, the top 1% of taxpayers contributed 37.3% of the government’s income tax haul, while the bottom 90% contributed only 30.5%. The bottom 50% were responsible for just 3% of the total tax paid. This is the same amount that was provided by the top 0.001% - about 1,400 citizens. These states highlight the financial power of individuals at the top and their importance for the country.

IRS statistics show that American families earning less than $100,000 per year have seen their risk of a tax audit risk rise by 17% since 2010.

In recent years, according to IRS tax data, there’s been a greater number of tax audits for families that are not high earners. At the same time, Americans who earn more than $100,000 saw an 8% reduction in tax audits. One explanation is that low earners are more likely to prepare their own returns and make innocent errors. Those who earn higher salaries are more likely to have their returns prepared by tax professionals who make fewer errors.

The IRS database of income tax statistics shows a clear connection between higher income levels and self-employment. The self-employed are subject to taxes that employees don’t pay, but they also enjoy numerous deductions. IRS figures are based on the number of people who take the self-employment tax deduction each year on their tax returns. It is conceivable that some eligible people choose not to take the deduction and the actual number of self-employed taxpayers is even higher. 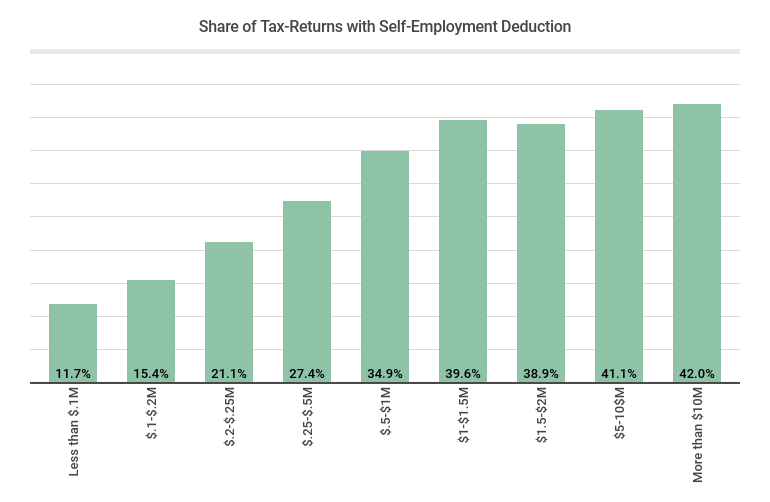 72% of tax returns that include income from sole proprietorships, S corporations, LLCs, and partnerships show business income of $100,000 or less.

Profits of “pass-through” businesses are added to the owner’s tax return as income for purposes of calculating taxes. Income tax statistics for 2015 show that these businesses contribute only about 14% of U.S. total business income. 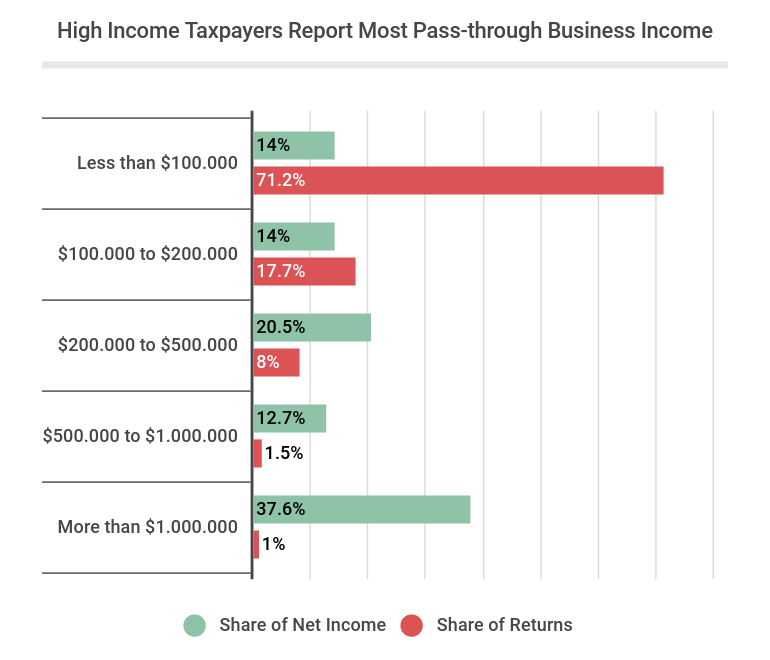 Their reported earnings in adjusted gross income was $10.2 trillion, and they paid $1.4 trillion in taxes. According to IRS statistics, this was a $14 billion AGI increase from 2015, though there were 316,000 fewer tax returns.

In 2015, 77.5 million Americans paid no federal income tax. About half of that number had no taxable income, while the other half had enough deductions to reduce their taxable income to $0 or less.

Data shows that from 2008 to 2010, tax evasion reduced federal revenues by nearly half a trillion dollars per year. The IRS refers to the lost funds as a “tax gap” and tries to deal with it through enforcement activities. The IRS says it managed to collect another $52 billion during those years through enforcement and acceptance of late payments. According to these US tax evasion statistics, it’s clearly not enough to fill the gap despite the IRS’s best efforts.

The IRS is extremely efficient at collecting tax revenues, according to tax return data. The agency also sets a great example, with 44.9% ethnic minority employees and 65.4% women on the staff. It’s a good place for veterans too - they make up 9.5% of the agency’s workforce.

53% of Americans feel that they pay the right amount of taxes.

A significantly smaller percentage of Republicans worry about making businesses pay up - only 52%. About 72% of Democrats also worry about the rich not paying enough taxes, which is a concern for only 45% of Republicans. What does bother Republicans? The complexity of the tax system (53%). Plus, 56% of Republicans feel that they’re paying more taxes than they should - and 33% say the poor aren’t paying as much as they should.

What Aspects of the Federal Tax Systems bother Republicans and Democrats 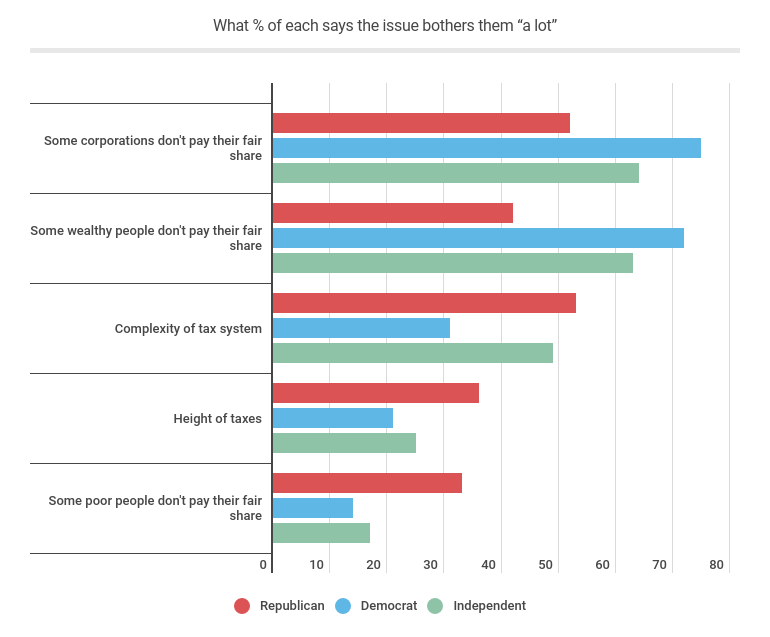 This fact has led to outrage among many taxpayers because many of them didn’t receive their highly anticipated tax-reform refunds - and some had to make additional payments. Tax return statistics show that this happened because people forgot to change their withholdings in accord with the major tax changes that went into effect in 2018. Tax reform resulted in slightly reduced or increased paychecks that many didn’t notice.

28% of Americans can’t name and don’t understand how tax law changed in 2017.

The biggest changes in the U.S. tax system come from the Tax Cuts and Job Acts of 2017. However, more than a quarter of U.S. citizens don’t fully understand the consequences of the law, and many ended up with smaller refunds than they expected. According to IRS tax return data, nearly half of taxpayers (48%) didn’t even understand how these changes affected their tax brackets.

34% of taxpayers say that the 2017 laws didn’t affect their financial situation.

People feel differently about the 2017 Tax Cuts and Job Act depending on their political inclinations. More than half (51%) of taxpayers who affiliate themselves with Republicans believe that the tax law will prove to have both long- and short-term benefits. The IRS statistics of income tell us that 34% of Democrats strongly believe the laws will be bad in both the long run and the short term.

59% of taxpayers changed their tax-filing behavior because of the 2017 law changes.

About 22% of taxpayers report that they’ve begun using tax-preparation software, while another 19% began seeking professional help so they wouldn’t be added to the income tax statistics about people who paid too much or too little.